SurvivalAxis Field Adventures, Episode 1: Smokey Lake, Stryker, Montana (January, 2019)
A Cold Hard Truth: How Urban Survival Knowledge May Save Your Life
7 Basic Prepping Tips For Surviving (Almost) Every Crisis
Survival Food Guide
What Are the Side Effects of Being Struck By Lightning?

What Are the Side Effects of Being Struck By Lightning? 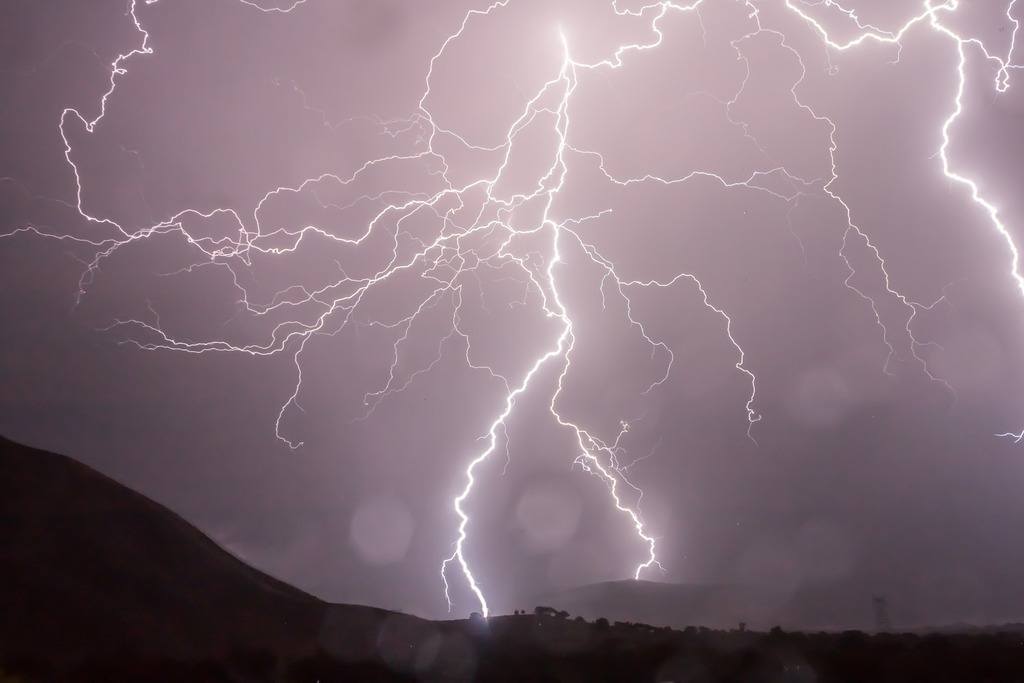 ​Lightning is a truly formidable display of nature’s sheer destructive force, and, because of this, it is universally avoided by humans. But what about those unfortunate situations where someone gets caught in an unexpected storm and is unlucky enough to get hit with a bolt of lightning? What are the side effects of being struck by lightning?​ First, let's take a very brief look at the circumstances when strikes occur and who the strikes affect. Most people think that golfers suffer the highest occurrence of strikes, but that is far from the truth. Fisherman account for the majority of strikes, followed by beach goers, then campers, then boaters. Fishermen account for about three times the number of strikes as golfers do. Males are also much more likely to be struck than females, at about 80% of strikes.

Next, lightning strikes on humans do not all occur in the same manner and can be categorized under four routes of being struck: a direct strike, side splash, contact injury, or ground current. Direct strikes are the least common, accounting for around 5% of strikes, and are a result of the electrical current from the lightning making direct contact with the victim. Side splash strikes are strikes that hit an object near a person, with the lightning arcing, or splashing, from the original strike point to the victim. Contact injuries occur when the victim touches an object that was struck recently and retains an electrical charge that then travels through the victim. The most common route for lightning striking someone is through ground current, accounting for about half of all strikes. This occurs when a strike hits an object or the ground near a person and the lightning travels through the ground to the victim.

Those are the four routes of being struck, but now let's look at what actually causes the injuries, as well as the side effects of being struck by lightning. There are three main factors of lightning that cause injury: Electrical energy, heat, and mechanical energy from the other forces interacting. Below, we will look at each of these forces a little more in depth and the distinct side effects each has on the human body during a lightning strike.

The electrical aspect of lightning is probably the most obvious force at play in lightning injury and is the most common cause of death in lightning strike cases. However, death is relatively uncommon in lightning strikes, with only about 10% of all strike victims sustaining fatal injuries. Those that are unfortunate enough to perish from a strike typically die from cardiac and respiratory arrest due to the electrical current disrupting the human body's natural electrical impulses. Death is more common with direct strikes and is usually the result of asystolic arrest (the most dangerous form of cardiac arrest) and respiratory failure due to paralysis of the lungs.

Even in the majority of cases where death does not occur, the electrical energy of lightning can have very serious side effects on a person. Heart problems are a relatively common side effect of being struck by lightning. The human heart runs using electrical impulses sent from the brain, and when these processes are disrupted, serious complications can arise. Some of these cardiovascular side effects may include cardiac arrest (which is usually what causes death) and irregular heartbeat, which can cause complications in other organs.

Neurological injuries are also possible from the immense electrical energy. Most people who are struck by lightning will immediately lose consciousness and many will have no recollection of the strike and may be confused and have difficulty concentrating or remembering recent events. If the brain trauma is severe enough, they may fall into a coma. Most long term impairments from a strike are generally neurological, with some survivors experiencing chronic dizziness, sleep disturbances, memory problems, irritability, trouble concentrating, headaches, slower reaction time, difficulty multitasking, and/or chronic pain. Some survivors may also experience significant, long term changes to their personalities.

Electrical current from lightning can also cause ocular cataracts, which can be a long term side effect of being struck by lightning. Heat and mechanical energy can also cause injury to the eyes. Strike victims may also experience Lichtenberg scarring, a phenomenon in which scarring appears on the body, outlining the path of the electrical current and believed to be caused by bursting capillary blood vessels under the skin. This scarring may last for a few hours to a few days and is useful in determining cause of death in some victims. Lichtenberg scarring from nearby lightning strike

Heat generated from electrical energy being converted to thermal energy can cause burns of several types, ranging from superficial to full thickness burns and internal burns. However, full thickness burns are rare and only account for about 5% of all injuries. They are generally caused from certain fabrics or metal objects that may heat to high temperatures, sometimes melting, causing serious burns. In the case of full thickness burns, cloth melting to the skin has been reported, as well as incidences in which the victim had an electrical device on their person, such as a cell phone, that became hot enough to melt and severely burn the victim, even melting deep into the skin.

The majority of burns occur on the skin, but they are typically minor and superficial due to the extremely brief interaction of the lightning with the recipient. They can manifest in a few different ways. A fairly common mechanism that will cause burns is the rapid vaporization of sweat or rain water on the skin, creating heated steam and causing burns. These are known as linear burns. Punctuate burns are another type of burn that may appear after being struck by lightning. They are characterized by small, circular burns that usually appear in clusters and are not very deep in the skin. They may resemble cigarette burns. Lichtenberg figures may also appear on the victim in the form of burns.

Damage of the eyes can be caused from the intense heat as well, and cataracts may form. Other side effects of heat reported in strike cases include the victim’s hair catching on fire, clothing burning off, and/or odors of burning sulfur or ammonia coming from the victim. Also, internal burns may occur from the presence of heated air within the body. The final force of lightning that commonly causes injury is the violent mechanical energy generated from the strike. This energy is created through a couple of different channels. It can be generated inside the victim when the electrical current from a strike causes muscles to rapidly contract. This rapid contraction had caused one particular victim to launch fifteen feet out of his chair and suffer a broken back and broken collar bone when he slammed into a nearby brick wall. Contractions can also cause temporary paralysis of different regions of the body. Many physical injuries to strike victims are from falls caused by this temporary paralysis of the lower limbs.

​Mechanical energy can also be generated from the shock wave of the strike, which is caused by the rapid heating and cooling of the air surrounding the strike victim. This brief heating and cooling of nearby air can create violent shock waves that have the potential to knock people off of their feet and throw them into the air or nearby objects, causing blunt force trauma or lacerations. Shock waves may also send nearby objects flying, with the possibility of the victim being stuck by flying debris. This can cause blunt force trauma, lacerations, puncture wounds and other forms of physical injury. Hearing problems also commonly arise in strike victims. This is due to the intense shock wave perforating the ear drums. Eye damage can also occur from blast trauma caused by shock waves.

​The rapid expansion of heated air within a strike victims body can generate large quantities of mechanical energy, causing injury. Side effects from hot air expansion inside the victim include cellular damage to the lungs, hemorrhage of internal organs, internal contusions, and burns to internal tissues. Enough force may be generated inside the victim to cause internal bruising and bleeding as well. The rapidly heated and expanding air can cause significant pressure within the body, causing the contusions and hemorrhages.

​Reports tell of strike victims having their shoes or clothing blown off, being violently thrown through the air, being struck by flying objects, and suffering internal injuries from the generation of mechanical energy. These mechanical side effects are caused by violent muscle contractions, nearby shock waves, or from the rapid expansion of air being heated inside or near the victim. From this investigation on the side effects of being struck by lightning, we have determined the four ways a person may sustain strike injuries and also the three main forces responsible for these injuries. Electrical side effects are the main cause of death in strike victims, with cardiac arrest as the main culprit, but heat and mechanical energy also produce many side effects. Side effects appear in a broad spectrum, including skin burns, internal contusions, respiratory and circulatory issues, neurological disruptions, seeing and hearing problems, and any number of physical trauma injuries.

Although most people survive a strike, the side effects of being struck by lightning can be long lasting and debilitating. While burns and other physical trauma will heal in time, many survivors suffer from long lasting neurological disturbances, circulatory and respiratory issues, and eyesight degradation. However, most long term side effects are neurological in nature, and include memory disturbance, trouble sleeping, irritability, slower reaction times, trouble multitasking, chronic pain, and/or chronic dizziness.

​So even though most strike victims survive the ordeal, it is no doubt a terrifying and life changing experience that can cause terrible short term injuries and may cause life long conditions that can range from mild to debilitating. It is best to avoid lightning storms altogether, but if you are caught in one, avoid water and seek shelter immediately.

​​P.S. Don't forget to check out our Buying Guides, ​Reviews, ​and our ​Blog​!!! Thank you for visiting!