SurvivalAxis Field Adventures, Episode 1: Smokey Lake, Stryker, Montana (January, 2019)
A Cold Hard Truth: How Urban Survival Knowledge May Save Your Life
7 Basic Prepping Tips For Surviving (Almost) Every Crisis
Survival Food Guide
What Are the Side Effects of Being Struck By Lightning? 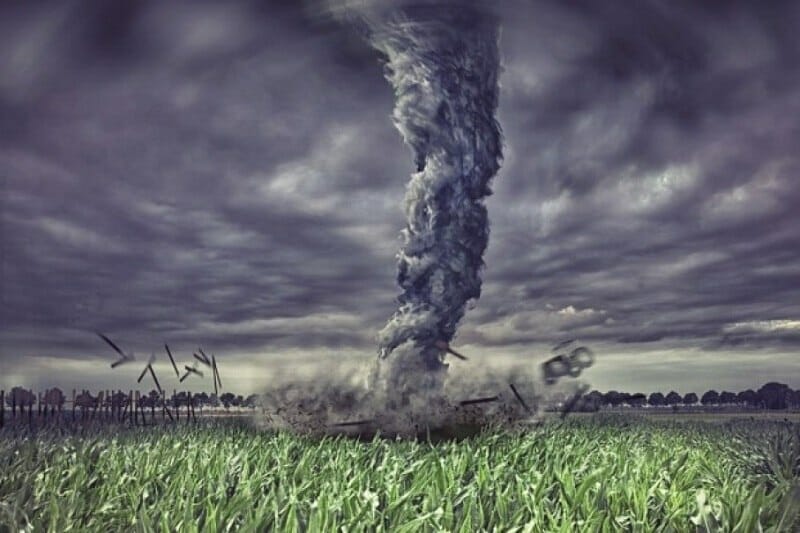 Natural disasters are a fact of life in many places around the world. While it may be unfortunate, it is simply the nature of the planet we inhabit for destructive events to occur every so often, and we do what we can to minimize their damage. For the time being, however; we can never entirely eliminate these events.

Tornadoes are a particularly nasty form of natural disaster, as they are incredibly destructive as well as more sudden. The United States has a few areas that are wracked with these massive twisters, but none of them are as dangerous as Tornado Alley. If you live in a region at risk of tornadoes, there are some things you should know. By the end of this article, you should be an expert at surviving tornadoes, as we’re going to be presenting our tornado survival guide. We’ll cover every aspect of making it through a tornado, from being adequately prepared for their appearance to what you will have to do in the aftermath.

The Importance Of This Guide

You may be wondering how much of a difference a short guide of tornado survival tips can make when it comes to keeping yourself and your loved ones safe during these events. Let us reassure you that being ready for a disaster is the best way to avoid any possible injuries or damages.

Of course, this guide won't make you impervious to harm from a tornado; it will give you a much better chance of making it out safely. Other than your personal safety, you may also be able to preserve your property better in the event of one of these natural disasters, reducing the costs later on.

Be Prepared: The First Part Of Tornado Survival

If you are looking to greatly improve your chances when a tornado comes around, preparation is key, and many of the tips on this list won't help if you aren't ready for a tornado in the first place. Whenever the issue of tornado preparation is brought up, it is critical to make the distinction between prep and paranoia.

You can be ready for a tornado to come at any time without having to fear every strange-looking cloud on the horizon. One of the best things that you can ensure you do when getting ready for a tornado is acquiring all of the supplies that you will need over the course of the natural disaster.

If there is going to be a tornado warning sometime soon, you won’t want to wait until after it to buy your supplies. First off, that would mean leaving the house while a tornado may sweep through at any time. Secondly, all the stores will be packed with people looking for last-minute provisions. You should assemble tornado survival kits for everyone in your home, which should contain everything that you need. For example, you’ll want to pack away non-perishable food, water, medical supplies, tools (such as a survival knife), warm clothing, water-resistant clothes, and much more.

Surviving The Tornado Itself

While preparation may be the most crucial part, it won’t be worth much if you don’t know how to get through the tornado when it finally arrives. Tornadoes can be massively lethal if they are sufficiently large, and even relatively small ones can rip the roof off of a house, so you’ll need to take precautions.

When you first hear the tornado siren go off, you’ll know that you have a limited amount of time to make your choices and that your family’s safety may hinge on them. If you have a concrete cellar, then you should move everyone into it for their safety, though less structurally sound basements may put you at more risk due to the possibility of collapse.

If you don’t have a cellar to position yourself in, then you’ll want to be somewhere near the middle of your home with plenty of vertical reinforcement. You’ll want to stay as far away as possible from any glass, as shards of it may come flying in, and that is one of the primary forms of injury during one of these disasters.

As the tornado is occurring, you will want to avoid going outside at all costs, as that may put you at risk of being thrown by the tornado. While it may seem like the possibility of debris injuries is higher in a house, it is better than facing a tornado exposed or in a vehicle, as the car may be lifted by the winds.

What To Do After The Tornado

As a lot of tornado survivors will tell you, the real work doesn’t stop until after the tornado comes through. If you are fortunate, the worst you may have to deal with is restocking your tornado supplies, which may take some time, as the stores around you will likely need to restock.

If you have more substantial damage to your home, you should speak to your insurance company about what is and is not covered. Once you’ve done that, with the cooperation of your insurers, you can begin the arduous process of rebuilding your home and restoring it to its former glory. If you were fortunate enough to avoid damage to your home, you might want to look into helping your neighbors or acquaintances with their own homes. Helping out in the community after a tornado is one of the best ways you can ensure that everyone stays close in a time of hardship.

Of course, injuries should also be treated as soon as possible, so seek medical attention for anyone who was harmed over the course of the natural disaster. While healthcare can sometimes be pricey, it is better than having to deal with an infection as a result of a wood splinter wound during the tornado.

We hope that this guide has given you all of the information that you need to survive a tornado. Feel free to leave a comment down below and let us know about any of your tornado experiences or what you think of the guide.